BAM conducted several experiments in collaboration with the Fab Lab at California State University Bakersfield, Splunk & Orion Labs. Every experiment explored the capabilities of the Smart Wireless Mesh across a variety of different missions:

For each of these missions the Smart Wireless Mesh was tested both for feasibility of conducting this type of mission, and the ability for the network to be field expedient or rapidly deployed within an austere environment.

Several novel capabilities were also uncovered over the course of the experiment week.

Experiments can be best categorized under the themes of:

Piloting of an Unmanned Ground System (UGS) typically requires an IP based connection to a Ground Control Station (GCS). Similarly, UGS sub-systems like the video feed from an on-board camera or ISR systems require IP connectivity to a display or collection device. The reliance on wireless line-of-site radio signals can constrain the range of a UGS. Similarly, the reliance on static or point-to-point IP routing between a UGS & GCS can constrain the ability of the IP network to recover from a routing fault.

AREDN can provide a UGS with IP networking and back-haul on-the-move, allowing both remote piloting and video streaming between the UGS & GCS. Additionally, because each UGS was also itself a AREDN node, every UGS is also able to extend the range of the existing network. Combined with another UGS this allows a multi-hop ‘swarm’ like system were multiple different UGS can extend or augment the existing network in real-time.

Situational Awareness (SA) platforms like ATAK & WinTAK can be configured to share data via a local-only IP network, or pass data out to another network segment or to a TAK Server. AREDN allows ATAK users on-the-move to be continuously connected to other ATAK users, or can be configured to backhaul SA traffic to forward-deployed or centralized TAK Servers.

The RedTAK “Tactical Data Switchboard” or “Tactical ETL” was developed using Node-RED. RedTAK allows SA data like Cursor on Target (CoT), as well as operational data from Mesh nodes, and piloting data from the UGS, to be streamed into Splunk for collection & processing through machine learning.

The ability to collect both SA and operational data from participants in the Smart Wireless Mesh lends itself to the use of machine learning (ML) to make predictions about changing network and end-user (or end-device) conditions. For example, a signal strength reading from a mesh radio can indicate an upcoming Loss of Signal (LoS) event, which is critical information to the pilot of a GS. Splunk and Splunk ML allow for the collection of and learning from all of this data. Splunk also allows for the input and processing of novel data, which can be used to measure user inputs, for example a Damage Assessment (DA) report sent via smartphone application, or spoken aloud through a PTT platform like Orion.

Smart Team and group communications systems are equipped not-only to facilitate real-time messaging between disparate users, but act on those messages at a System level.

Several proof-of-concepts and capabilities were tested at JIFX, with novel capabilities developed on-site and in ad-hoc collaboration with other JIFX participants & stakeholders. These capabilities centered around the themes of: Unmanned Systems, mobile on-the-go connectivity, edge compute, sensors/IoT, ISR & field expedience.

Several remote systems that were capable of full-duplex data transfer were also integrated into RedTAK, allowing the RedTAK system to transform any real-time SA data into a format compatible with another remote system - allowing each to render a COP in their native representation.

Systems like Orion & Twilio that were capable of sending, receiving and understanding human voice, typing and multimedia messaging were able to interact through either their own, or a native CoT channels. 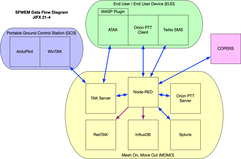 Splunk collected all operational & SA data originating from and passing through the experiments at JIFX. Early operational questions could be quickly answered with Splunk. All data passing through RedTAK could be transformed and indexed by Splunk. This data pipeline allow a wireless RF anomoly enountered early in experimentation with our UGS to be quickly isolated. Using a Splunk Alert with RedTAK allowed us to delivery an instant LoS condition alert to the GCS.

Of interest to our collaboration with Splunk was to test the ability to act as a data force multiplier for DSCA operations, particular within the disaster response and evaucation planning missions.

Using ATAK with the WASP Plugin, rescuers were able to populate a damage assessment dashboard within Splunk in real-time. For users operating in a heads-up mode, Orion was used to understand PTT conversations between rescuers. Finally, for users with limited message capability within LTE denied environments, SMS text messages with damage assessment reports & locations could be sent & received by Twilio. 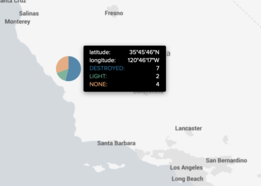 A procedure was developed on-site to transform ArduPilot Mission Planner UGS location positioning data into Cursor on Target, a format used by Splunk, ATAK and others. In this procedure, WinTAK running on the GCS computer was used as a NMEA to CoT gateway. Effort was made to analyze real-time UGS operational data in Splunk by utilizing a Mavlink decoder with limited success. 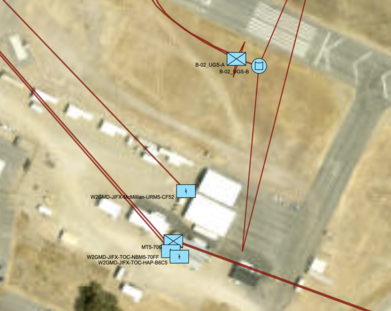 An attempt was made to integrate Mavlink data into both Node-RED & Splunk with limited success. Further research is recommended in this area.